skip to main | skip to sidebar

I usually give some idea of the cost of the book from a single supplier. There is no particular significance to this, the chosen source simply being the cheapest I could find with minimum searching of the interweb on the date of the original posting. 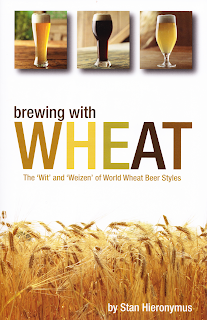 I liked Stan's previous book "Brew Like a Monk", as you can see in my review on this blog, & I was pleased when I found out he was working on a book about wheat beers, a variety of beer I enjoy but don't know too much about.

BWW is similar in format to BLAM. It is not a "how to brew a wheat beer" guide and, although there are details of many beers discussed there are no recipes as such. I think this is one of the strengths of the book. Enough detail of the production of, and philosophy behind, named beers is given to inspire a brewer in recipe formulation with out getting bogged down with details of the brewing process that any reader is going to understand anyway.

The book starts by discussing wheat as an ingredient, both in bread and beer, from an historical perspective. Wheat has always been important in baking and has become increasingly so over the last two centuries whereas, on the other hand, wheat was in the past much more important in brewing than it currently is, although it is being more widely used these days.

A characteristic of most wheat beers is haziness and cloudiness. A very interesting chapter is devoted to this. A beer made from 20% wheat would probably have some haze but, as the proportion of wheat is increased the degree of haze will decrease. Yes you read that right. A 50-60% wheat beer will probably drop bright. Now, of course, this is the sort of proportion used in, say, a German hefeweizen which would not be bright. The brewers of hefeweizen overcome this inconvenient clarity in a number of ways such as removing the primary yeast, flash pasteurising to stabilise the protein in suspension, and then bottling with a non-flocculant yeast to prevent it settling and dragging down the protein with it. Draft hefeweizen containers are delivered upside down so that the yeast and protein is resuspended before dispense. Although that seems a lot of trouble, it must be better than the strategy adopted by some US brewers of using additives such as Tanal A or Biocloud, which sounds yummy.

The same chapter includes a section on the production of the clove flavour found in weizen and wit beers. The flavour compound is 4-vinyl guaiacol (how the hell do you pronounce that!). Wheat contains the precursor of this in the form of ferulic acid. Ferulic acid is released from barley at a mash temp of around 45 °C and a temperature step or decoction mash may include a ferulic acid rest. Once the ferulic acid is released from the wheat it can be converted to 4-vinyl guaiacol by a suitable (Phenolic Off-flavour Positive) yeast. POF+ yeasts are characteristic of weizen production, less so for wit beers.

We then move onto a description of wheat beer by region: Belgium, Germany, and the USA. For many Hoegaarden is the definitive Belgian wheat beer but, as Hieronymous points out, Wit beer as a species had died out before Pierre Celis revived it in Hoegaarden and compared with historical examples it is atypical. In 1948 the great brewing scientist Jean De Clerk found that Hoegaarden, Peeterman, and Leuven Wit were all infected with Lactobacilli and sometimes Pediococci. He described Hoegaarden as very sour. It is not surprising that these beers were infected in this way because the brewers used white "wind" malt, short boil times (and may not have boiled the wort at all, merely heating it near to boiling), and very low hopping rates. The beers were cloudy and white from microbiological and protein haze and because the beers were drunk while still fermenting. Plenty of detail of old production methods for many types of wheat beer is given illustrating many various unique or just plain weird production methods.

A whole chapter is devoted, quite properly, to Pierre Celis who has had a role in the popularisation of spiced wheat beers, in the Belgian style, both in his home country but also the USA. Without Celis wheat beers, in particular Wit, would be no where near as popular as they currently are. His influence in the US has been phenomenal and he provides a direct link between Belgium and the USA. Mind you this chapter includes a section on Coor's Blue Moon. I recently had the misfortune to try this. It is a peculiar looking beer with an odd orange hue and a weird haze which doesn't look quite right. I wonder if this is Biocloud in action? Things got worse on tasting it. It is without doubt one of the most horrid beers I have sampled in the last few years. Mind you it could be worse. The next chapter describes a wheat beer with bloody Cascade hops in it. Wrong, wrong, wrong.

Anyway back to the book. Off to Germany next, so put the spices away and forget about Pierre Celis. First off, Bavaria for Weizen. Unlike Belgium, and often the USA  the spiciness evident in these beers  comes from the distinctive POF+ yeast. One of the great Bavarian Weizens is Schneider. This is produced  using an odd mix of techniques: a decoction mash (with ferulic acid rest) followed by top fermentation in open fermenters. The brewery believe the open fermenters, and the aeration they lead to, are essential in developing the clove-like flavours they want in their beers. Wheat beer nearly disappeared in Germany as it did in Belgian. It returned from the verge of oblivion when it became popular and trendy because of its perceived healthy appearance. Bless "the young", I knew they would be useful for something.

From Germany we move on to the USA. Wheat beer in all its varieties has been a big success in the USA. Some microbreweries find their cloudy wheat beers are their biggest sellers. It is hard to imagine that happening in the UK. I have to say I didn't enjoy this section, not that there is anything wrong with it. Its just that I get irritated with so many aspects of the US micro scene especially when they start messing around with things like Weizen which is just fine as it is. That's just me. A reactionary old fart.

Leaving the US behind we return to Europe for a discussion of various historical and less important wheat beer species. Things like Berliner Weisse (which is uncomfortably close to extinction), Gose, Lichtenhainer and the like. We are back to bacterial infections again.

The book concludes with a chapter on style guidelines and beer judging. The US style guidelines for some of these beers are, like several of the European styles, highly dodgy and apparently the standard of judging leaves something to be desired. I have little interest in style guidelines and not much more in judging but there is quite a lot of thought provoking stuff in this chapter and a lot of sensible advice on making  good wheat beer.

I didn't enjoy this book as much as BLAM but it does have plenty of interesting things to say. It is certainly worth the price and will be a useful book to have on the shelf for future reference. If you want to make a wheat beer it would be well worth reading BWW before starting.
Posted by mentaldental at 17:19

Some links to nice people 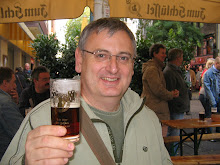